India, here I come! Excited that I will be able to attend Amartithi this year and also meet Naniji in Delhi. Its not that I am going after a long time. In fact, on an average I have been taking atleast one trip a year since coming to the states in 2010. Its just that the past 3 trips felt somewhat unfinished, unsatisfying and too rushed to let the experience of being in India sink in. Maybe it was the chaos and rush at home during our wedding and engagement ceremonies in 2013, or maybe the hassle of visiting the US Consulate on almost every trip. Thankfully, USCIS now has a dropbox interview waiver program which allows, in certain cases, for visa extensions to be handled at offsite locations without the need for an excursion to the Consulate. Sid’s wedding was the added bonus I squeezed into the trip. Unfortunately, Aish had visited India last June itself, so she decided to sit this one out.

I booked Emirates to and fro, departing on the 28th of Jan from SFO and arriving back on the 14th of Feb (about 2 weeks of actual stay time). Aish took half the day off and dropped me to the airport on Thursday morning, for my flight that departed at 3 PM. Never before have I been this unlucky with crying babies on a flight. I had 2 beside me on the right, and one on the left, along with a few more in the rows behind. Could not sleep at all. Note to self: never choose a seat towards the front of the cabin since most babies need bassinets which are usually installed in the front. I landed in Bombay at around 3 AM, excited to meet Mom and Dad after a year. We checked into a hotel in Vashi so that we could easily leave Bombay the next day and drive to Nagar. I did drive a bit as well the next day, its always fun driving with a manual transmission although I had to keep reminding myself to keep left!

We arrived at Nagar around 6 PM or so after leaving Bombay at 1PM. We went to the Samadhi for darshan but the lines were fairly long so we just did window darshan. Had dinner at one of the stalls at the Samadhi itself after which I was completely exhausted and fell asleep as soon as my head hit the hotel bed’s pillow. The next morning we went for Amartithi; we were lucky to run into Mistry and Derukkar Uncle while we were there. A wave of calm and serenity swept over the open grounds at Meherabad as the thousands of people gathered there held their silence for a whole 15 minutes at noon. I was happy I could make it this year after almost 5 years. In the past years, I usually watched the webcast and held silence the night previous, coinciding with 12 noon in India.

We reached back home to Pune in the evening. I went to the US Visa facilitation center at Sohrab Hall the very next day to submit the passport for visa stamping. It was quite seamless; submitted the documents, got out in 15 minutes and then collected the passport with the visa stamped in after a week.

The other satisfying aspect of this trip was getting a chance to fix up a lot of pending electrical, computer and plumbing tasks that Mom and Dad did not know how to do. The computer was in a bad state since I left in 2010; it had Linux and Vista installed at the time and then the technician installed Windows 7 on it as well. Also, the RAM was quite low and the inside of the CPU case had not been cleaned in ages. I organized the bookshelf upstairs and got rid of a number of school and engineering textbooks which weren’t needed anymore. I removed the Diwali lightings, checked all of them and helped Mom put them away. I also simplified the telephone wiring in the house by removing stale wires and insulating the junctions properly to prevent corrosion. I cleaned and organized Choco’s cupboard which had a lot of old collars which he had grown out of and some biscuit packs which were half open. Threw away a number of old software CDs which were outdated now and just taking up space in the house. I helped change a few lightbulbs, and also made sure that we had the plumber come in and fix the tank on the roof to the main water line. Pune’s had a pretty bad monsoon this year so the chances of there being water shortage in the summer is high. Hence the urgency for getting the water tank fixed to the line. 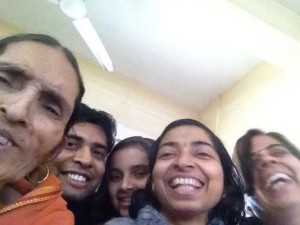 Aish’s parents visited us on Thursday after traveling to Shirdi the previous day and we spent a good half day together at home. On Saturday the 6th, I visited Naniji and Annu Mousie in Delhi for a day. Naniji has not been keeping too well for a while so I wanted to visit her and spend some time with her. Nani had made such an elaborate set of food dishes that I relished eating. She even made the pooris for the pani pooris from scratch! Toni Mousie and Anusha also came over and we had a good time catching up and talking about the old days at the IIT Kanpur house.

Sid’s wedding was on the 11th of Feb at Akola, a small town about 700 km from Pune. Zafeer was nice enough to book the train tickets so that we left on the evening of 10th, reached Akola on the 11th morning at 4.30AM. 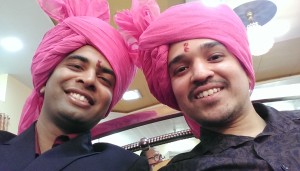 With Zaf at Sid’s wedding

Sid had a car arranged to pick us up from the station and take us to a hotel so we could freshen up and get some rest before the ceremony began at 11AM. The wedding was a lot of fun as well; great food and a nice venue big enough to accomodate everyone with air conditioning. We had some time after the wedding to take a look around the town for some sight-seeing before catching the train back for Pune in the evening.

I had mixed feelings towards the end of the trip; I would miss home, parents and Choco but was also looking forward to getting back to Aish. Generally, I highly recommend traveling to India in the February / March timeframe; the fares are way cheaper, the weather is pleasant and its just a lot calmer at the airports and in the aircraft cabins.